Rachel, a 35-year-old unmarried schoolteacher who feels as though she's wasted her life. Her best friend, Calla Mackie invites her to attend a religious revival meeting. Here Rachel is swept up in the emotional fervor orchestrated by a guest preacher. It's the first incident which convince Rachel to kick over the traces and express her own needs and emotions. She has a brief sexual liaison and is delighted at the notion that she might have become pregnant. Rachel ends up alone and childless, but still determined to forge a new life.
"Where I'm going, anything may happen. Nothing may happen. Maybe I'll find a friend. Maybe I'll even marry a middle-aged widower and have children in my time. Most of the chances are against it, but not, I think, quite all. It may be that my children will always be temporary, never to be held. But so are everyone's. I will be afraid, always. I may be lonely, always. What will happen? What will happen?"
- Rachel Cameron
Joanne Woodward received her second Oscar nomination playing Rachel Cameron, a 35-year-old spinster schoolteacher, who feels that her life is meaningless. Haunted by memories of her childhood and her mortician father, Rachel spends each frustrating day taking care of her mother and working with the schoolchildren. The character of Rachel Cameron is an odd one. She still sleeps in her child bed, and  still lives

with her mother. She is not in control of her life. In the first half on the film, there is something very childish in her performance, then she transforms herself into a very intriguing and appealing woman. This total paradox is well executed by Joanne Woodward, but it comes too fast. It’s probably for me the only mesmerizing and good point in her performance. Rachel Cameron is a bit paranoid and very frustrated – this side is the better shown by Joanne Woodward, she plays the naïve and vulnerable woman perfectly. She’s at a turning point of her life: she thinks she doesn’t achieve anything, she is alone, childless, frustrated. She is freaking out, tormented and tortured. At this right moment, her performance takes a turn but not the right one. She could have been very interesting if she had made other choices in her acting. She doesn’t show her inner struggles well. The role is really strong and complex, but she fails to ground her character. Joanne Woodward fails to make us understand her character. She is a mystery at the beginning, she is still a mystery at the end. Sometimes, her reactions are a bit too much and mannered, Joanne Woodward doesn’t really seem true or authentic. Her acting is really calculated and artificial. She never makes us care about her, in fact she doesn’t let the audience having empathy for her. Her performance lacks in intensity and depth. The progression of the character is unexplained and goes too fast which is detrimental for such a complex character. She fails to humanize the passion and feelings of the character. 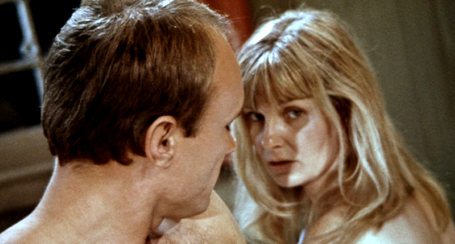 Christmas 1183. An aging and conniving King Henry II plans a reunion where he hopes to name his successor. He summons the following people for the holiday: his scheming but imprisoned wife, Queen Eleanor of Aquitaine; his mistress, Princess Alais, whom he wishes to marry; his three sons (Richard, Geoffrey, and John), all of whom desire the throne; and the young but crafty King Philip of France. With the fate of Henry's empire at stake, everybody engages in their own brand of deception and treachery to stake their claim.
"Just what you want, a king for a son. You can make more, I can't. You think I want to disappear? One son is all I've got, and you can blot him out and call me cruel? For these ten years you've lived with everything I've lost, and loved another woman through it all, and I am cruel? I could peel you like a pear and God himself would call it justice!"
- Eleanor of Aquitaine
Katharine Hepburn received her eleventh Oscar nomination and third win for her portrayal of Eleanor of Aquitaine, the estranged wife of King Henry II, whom he keeps locked in the Salisbury Tower at Windsor Castle. She is invited for Christmas 1183 to discuss about who should inherit the throne. Eleanor of Aquitaine is a very strong-minded and determined woman, as Katherine Hepburn was in her real life, which made her cast in the film completely perfect. The character is very well-written and goes deeper and deeper through the film. It is way more complicated and heartbreaking than it looks at first sight. Katharine Hepburn adds a lot of humor to Eleanor, and it’s a pure joy to see that she really understands her character. Eleanor of

Aquitaine is very cynical, bitter, but also very manipulative and avid. She is very determined to see her “favorite” son on the throne, so she will do everything possible to see that. She reveals herself to be also very jealous, very subtly, we feel it just with her way to look at Henry and Alais (his mistress). Katharine Hepburn’s look is transparent, tearful, allowing us to see all her emotions. Step by step, the character becomes more and more emotional, she reveals she can't stand to be a prisoner anymore. This scene is painful and very well-interpreted by Hepburn. She appears damaged and Hepburn brings a lot of vulnerability and complexity to humanize her character. She embodies the Queen larger than life, she is very effective in her way to stand and her way to speak. She graciously manages to say the worst things in the most charming way.  Katharine Hepburn is very compelling and mesmerizing, her skills are endless, she has always something new to impress us. She doesn’t push the boundaries, because she has no boundaries: She can do everything. She is clearly helped by her partners, the screenplay which is amazing, and the most brilliant lines from the script allowing her to steal every scene she is in. The duo Hepburn/O’Toole, who is incredibly brilliant, works very well on screen. The game, because it’s a game between them is humorous, ferocious and in many ways touching. 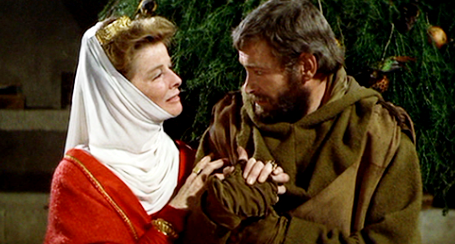 AND THE NOMINEES FOR THE BEST PERFORMANCE BY AN ACTRESS IN A LEADING ROLE ARE ... 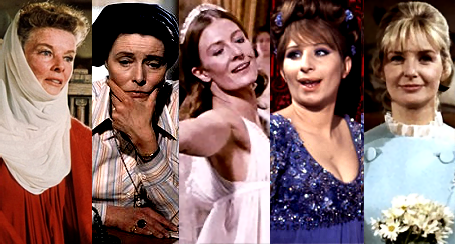 Annette Bening in THE KIDS ARE ALL RIGHT

"Annette Bening gives a poignant performance that embarks the audience to live with her a great emotional journey."
★★★★★

"Jennifer Lawrence delivers a haunting and complex performance with so much realism and full of empathy."
★★★★★

"Nicole Kidman puts her soul in this film and gives an emotionally challenging performance.
★★★★★

"She faces any challenges and gives once more one of the most realistic, convincing and authentic portrayal."
★★★★★

THE CONCLUSION
2010 was an incredible year for actresses, and those five actresses were the best that year, but I would have maybe replaced Annette by Julianne Moore. Everyone in this line-up gave a very intense performance. The ranking was difficult to make, especially in the top three, but Michelle Williams is hands down my pick, she doesn't give a performance, she doesn't act, she embodies Cindy, in a way I have rarely seen on screen. Natalie Portman and Nicole Kidman are really close to Williams, each one probably gave the best performance in their respective career, I put Kidman ahead because even if Natalie is exceptionnal, I think the role of Nina Sayers is such a showy and rich role that any talented actresses could give at least a fine performance with it. Jennifer Lawrence is a real surprise, she's clearly one of my new favorite actresses, and I really want to see what she will do next. Annette Bening really impresses me. Usually, I'm not fond of her acting, but here, she's really great. The Competition was so hard that year, everyone gave an Oscar calibre performance.

THE ACADEMY AWARDS and ME

Nina is a ballerina whose life is completely consumed with dance. She lives with her obsessive former ballerina mother Erica who exerts a suffocating control over her. When artistic director Thomas Leroy decides to replace prima ballerina for the opening production, Swan Lake, Nina is his first choice. But Nina has competition: a new dancer, Lily, who impresses Leroy as well. Swan Lake requires a dancer who can play both the White Swan with innocence and grace, and the Black Swan, who represents guile and sensuality.
"He picked me, mommy! I'm the new swan queen!"
- Nina Sayers
Natalie Portman is a great actress, but she never really challenged herself until this role in « Black Swan ». She received her second Oscar Nomination and first win, playing Nina, a young ballerina in a New York City ballet company whose life, like all those in her profession, is completely consumed with dance. It’s a real showcase for an actress, she is in every single scene of the movie. She can bring all kind of emotions: Despair,

joy, disappointment, anger, fear, determination, and pleasure. Well, she is really captivating, and convincing. From the naïve and Fragile young woman, Natalie Portman turns herself into this seductive and confident Nina, and manages to portray an incredibly convincing transformation. Her transformation through the movie is disturbing and very intense. At first, she's sweet, innocent then she transforms herself into this volcanic and sensual ballerina. We can really salute the hard work she's done. She works on her voice and finds something deeper and affected, she also manages to recreate the gestures and the physical behavior of a ballerina. She gives a very tortured and damaged performance and shows rightly the background and the discipline of ballet. The relation with her mother reminds the one in the movie “Carrie”- Their relationship is very complex, raw and tense, it is really well-executed on screen, thanks in part to the amazing Barbara Hershey. I don’t find the “lesbian” relationship really interesting and doesn’t bring anything special to the film, but that’s okay. Mila Kunis is damned sexy and provocative. 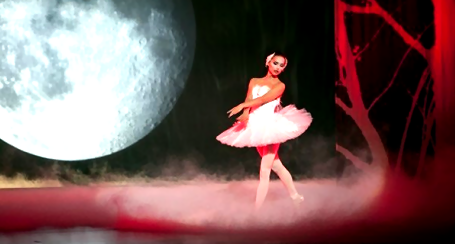 "[She] is captivating as Nina ... she captures the confusion of a repressed young woman thrown into a world of danger and temptation with frightening veracity."
- Screen Daily
In maybe the role of her lifetime, Natalie Portman, in a very emotionally and physically challenging performance gives a tour de force. She embodies a ballerina larger than life. The role itself is really Oscar worthy, but it needed someone as Natalie to really be exceptional.
★★★★★
4 commentaires
Email ThisBlogThis!Share to TwitterShare to FacebookShare to Pinterest
Labels : 2010, Natalie Portman
Older Posts Home
Subscribe to: Posts (Atom)

CHASING-OSCAR is a blog about the best actress category at the Oscars. I'm a ranking freak, so I will do my own ranking, and make my own decisions about who deserve the golden statue. Year by Year, I will watch all the nominees, make a little review and give a grade to finally pick a winner... it's all about subjectivity ... but I'm thrilled to begin this journey, and hope some of you will enjoy it.
- Cole 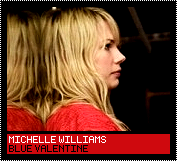